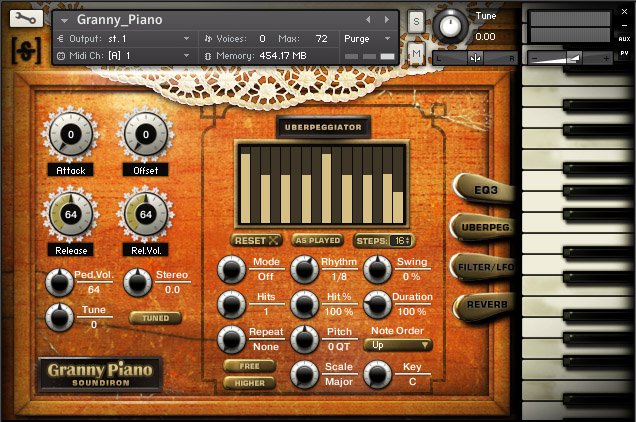 This instrument is pretty special to us, though it doesn’t sound all that great. Actually, it sounds pretty damn rough. We realized that there is already a million other amazing piano libraries around, but none of them ever-captured the authentic beauty of a dusty-old-haven’tbeen-played-since-granny-lost-her-hearing upright piano. It has been sitting in the living room of an old friend’s house for a good long decade and who knows where it as before that. We don’t know the brand or model off hand and can’t find any pictures of her now, but she looked to be about 60 or 70 years old and quite beat up the last time we saw her.

Her tone is watery and faded. There are a number of broken and badly detuned strings, especially in the upper range. The wood is pitted and scratched and the ivory was partially or completely missing from more than a dozen keys. She was way, way out of tune and there were more than a few broken strings in the higher octaves.

Every note you’d play started with a loud, wobbly wooden thud and ended the same way as soon as you lifted your finger again. Sometimes, she would creak and groan in the middle of the night, for no reason at all really.

Clearly, the years were not kind to her looks or her voice, but her soul truly aged like fine wine.

* Authentic, nostalgic, untuned upright piano
* All White and Black keys from A -1 to C7 are individually sampled (even the broken strings)
* All notes from A -1 to F#0 and F4 – C7 sampled at 3 velocities
* All notes from G0 – E4 sampled at 4 velocities
* 2x Round-robin on the mf layer between D3 – E4
* Including lid opening/closing and pedal press/release sounds
* With and without damper
* Soulful and rather poorly tuned
* 3 instrument patches, 708 samples, 900 MB
* Sample resolution: 48Khz/16Bit stereo wav format
* Format(s): Kontakt 2 and .wav