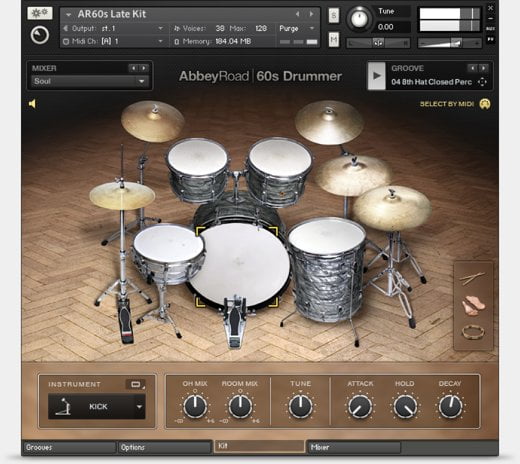 * A selection of vintage Zildjian cymbals were used from the early and late 60’s, including a rivet cymbal dating from 1963.

ABBEY ROAD | 60s DRUMS were recorded using only the absolute best period equipment, including the legendary REDD.17 valve mixing desk from 1958, an EMI TG mixing desk introduced in 1967 as well as a valve Studer J37 4 track 1-inch tape machine from 1964. Each kit was recorded with an array of microphones from the studio’s microphone collection – one of the largest in the world. A selection of classic Neumann, AKG, Sony and STC models were used to record each drum and percussion element from both close range and further away – capturing the legendary ambience of Abbey Road’s Studio Two. The individual direct and room microphone signals are all separately adjustable – giving you detailed control of the overall sound. For further details please check the manual