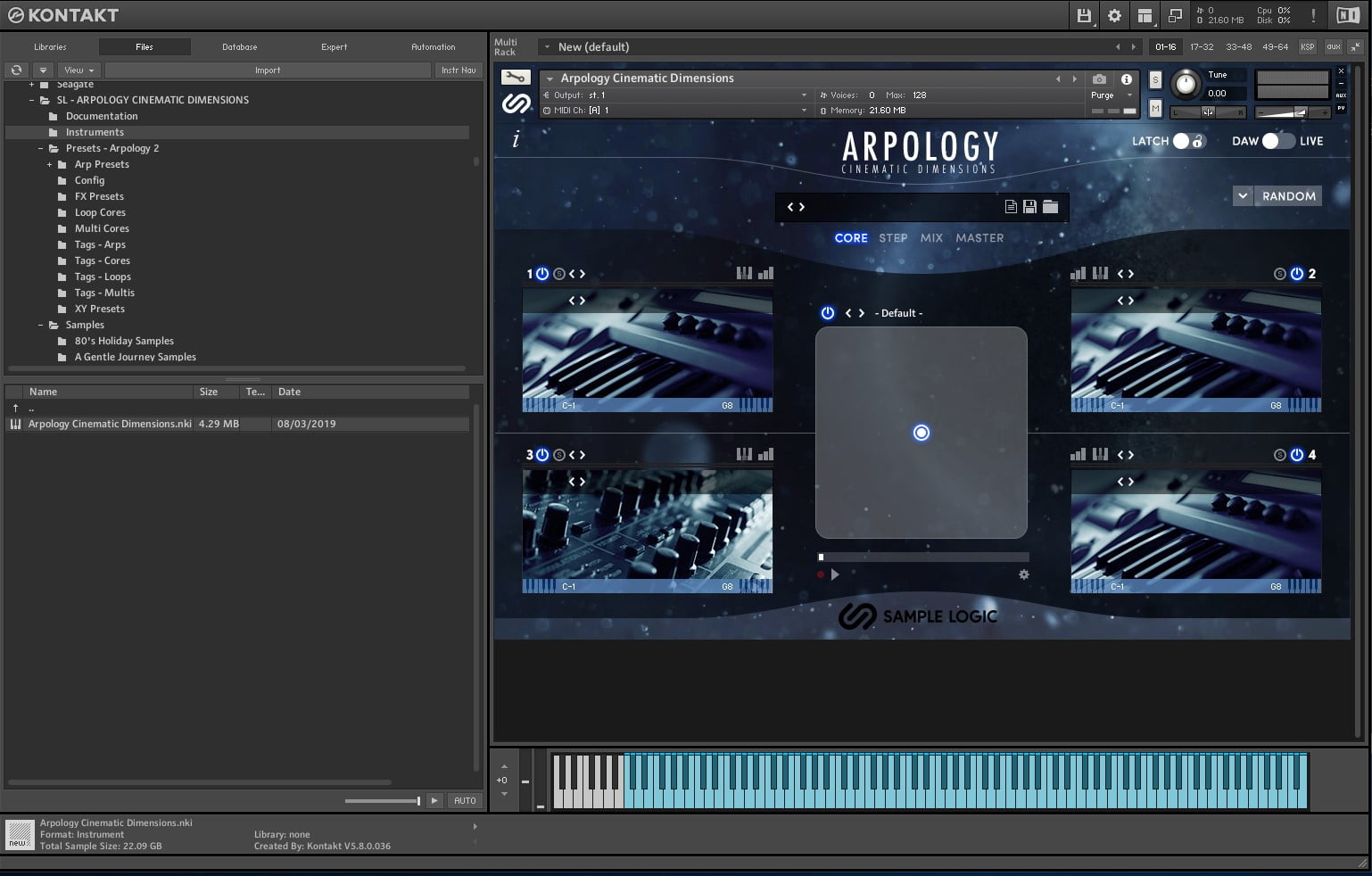 Description : Back in 2012, Sample Logic developed an arpeggiator that changed the course of the game and shook the industry, leaving all other arpeggiators in the shade. This groundbreaking script is called Step Animator, and it has become the driving force behind the fantastic library of multi-genre samples, the original ARPOLOGY. This library has created magic from individual tools with an incredibly versatile turn-based animation. Fast forward to 2018, and Sample Logic shakes again, but this time arpeggiators rise to a whole new level.

The team has spent an entire year developing ARPOLOGY: CINEMATIC DIMENSIONS which quadruples the power of the original ARPOLOGY with the addition of an all new 4-core performance engine, individually animating 4 instruments to create one cohesive sound. This allows users to blend up to 4 instruments while using different arp patterns at the same time, yielding amazingly creative results. This new iteration of ARPOLOGY is not only more powerful, but includes 23 + GB of recorded instruments (from the original ARPOLOGY and newly recorded content). The library boasts over 1,200 presets designed to deliver flexible sequencing and arpeggiated grooves for all types of cinematic productions
STEP INTO THE FUTURE: Infinite Randomization
Built from the ground up, this is an entirely new product which has been specifically designed for musical motion. Each of the presets are uniquely diverse in style and scope and that’s just the start. CINEMATIC DIMENSIONS features powerful built-in randomization functions which can automatically inspire in an infinite number of ways. With these randomization features users can remix fragments of presets to forge together uniquely original cinematic sequences never heard before; all at the click of a button. Feeling lucky? Roll the dice with “Random”!
LEVEL UP: Dynamic Preset Browsing
Sample Logic has gone to great lengths to consider the end user’s needs. Time is money and deadlines abound! Dialing in the perfect sound quickly and easily is paramount, so ARPOLOGY CINEMATIC DIMENSIONS makes that happen. This is the main purpose of the built-in preset browsing system; an intuitive, dynamic one-stop solution for choosing presets and playback manipulation. The browser lets users explore any sound available in the library from one central location. Access sound sources, sound cores and instrument presets with the ability to solo and bypass cores and activate step animators while browsing or performing. Choose to filter through sources, effects, patterns or any combination of these. Even isolate specific attributes of a preset while sorting through each preset, one by one. Looking for a step animator pattern or sound source only? Then choose it in the browser and leave the other parameters as they were. Alternatively, just keep it simple and load whole sound core presets that combine into one complete 4-core instrument. Decide which elements of the presets to use to create unique combinations. Finding sounds and presets is a breeze when using the multi-tag browser system. Each source, core, and multi tagged with descriptive genre driven IDs. From there, favorite presets to save them for future use.
INTUITIVE INFRASTRUCTURE
As the product title implies, there are many different dimensions to ARPOLOGY: CINEMATIC DIMENSIONS. Beyond the browsing system, Sample Logic has designed a straightforward approach for digging deep into presets and customizing them. The framework of the interface is divided into 4 main sections: CORE, STEP, MIX & MASTER
CORE: Use this section to load individual sound core presets or sound sources into any of the 4 cores. At the center of the CORE interface is a XY controller used to visually blend the mix of the 4 cores. The XY controller movements can be assigned to a hardware controller or animated with a preset automaton pattern. Additionally, record custom XY movements to play back each time a note is triggered right inside the interface.
STEP: This is where the magic happens … programming animation to all 4 cores. In this section, add movement in 2 ways: through the Step Animator and or via the Dynamic FX Animator, which allows for easy FX automation. The Step Animator gives each core a unique arp sequence. This isn’t just a run-of-the-mill arpeggiator as it has many more customizable functions and performance parameters than just a standard arpeggiator. Set the length and attributes of each step independently with up to 128 steps. The STEP section has over 300 unique animation presets, all randomizable to conjure up new patterns on the fly. In addition, use the dynamic browser to load up just the step pattern of any of the main presets via the browser filter section, resulting in limitless combinations of sounds and animations. The lower half of the expanded STEP section has 6 effects slots with over 25 different effects to choose from and each of these can be animated. The Step Animator and Dynamic FX Animators are on separate internal clocks, allowing even more freedom to create syncopated and polyrhythms between each core.
MIX: Similar in layout to the CORE window, the MIX window is tailored towards mixing each core. Adjust attack, release, EQ, energizer and more.
MASTER: This is where everything gets summed into a stereo mix. The master section houses 8 dynamic effect inserts that allow for custom master effects chain, applying the parameters to all 4 cores. This is extremely handy for polishing the entire instrument as a seamless whole. From compression and saturation to delay and reverb, use the many and varied controls to instantly make presets production-ready.