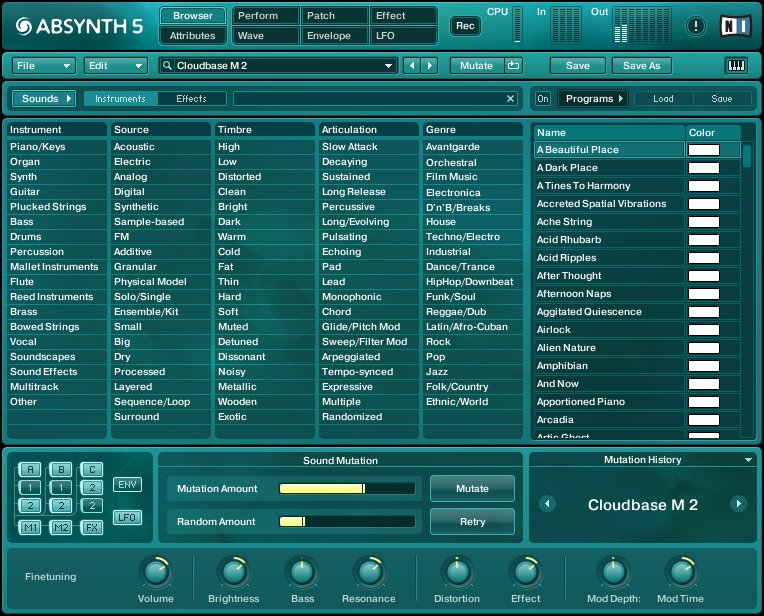 Bad Watermarks,
just leak personal info
when it is stolen.

ABSYNTH 5 is an exceptional synthesizer with unique sonic potential and more than 2,100 preset sounds. Its speciality is a limitless spectrum of unusual, evolving sounds created using the powerful, hybrid synthesis architecture and sophisticated modulation and effect system – resulting in sounds far removed from the everyday. What’s more ABSYNTH 5 is not just a synthesizer, but a powerful effect plug-in for treating audio tracks using the unique ABSYNTH 5 effects bank.

Version 5 sees ABSYNTH make creative sound design simpler than ever before. With the innovative Sound Mutator it’s now possible to create completely new sounds by combining the characteristics of other sounds, generated without delving into the depths of the synthesis architecture. ABSYNTH 5 also contains new and unusual effects and filters such as the Aetherizer, Cloud Filter and Supercomb, as well as 250 new presets that explore previously uncharted regions of sound.

THE ARCHITECTURE OF SOUND

ABSYNTH 5 is unrivalled as a tool for creating unique sounds. The hybrid architecture features three oscillator channels and a semimodular signal flow combined with diverse sound generating methods such as subtractive synthesis, FM, wave-table, granular sampling, and sampling with wave-morphing, filters, modulators and effects. In addition, a uniquely flexible envelope control with 68-stage envelopes allows for sounds to be subtly or radically animated. From softly undulating pads to aggressive rhythmic synth attacks – everything is possible with ABSYNTH 5.
————————————————————————————-
Nothing Special.

1.Install the update.
2.Copy our cracks.
3.Give a specific permission to the *.app.
4.Enjoy!

Support the good developer if you like it.
We would like to support you for free as long as you understand
what you are doing and what it means.