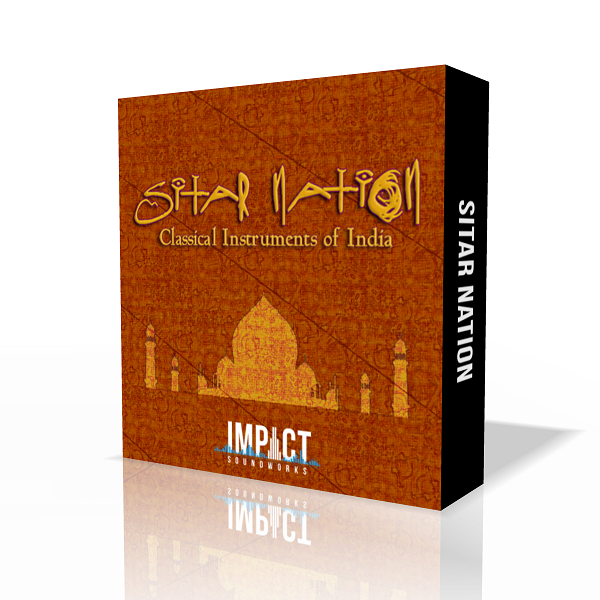 We came up with the idea for Sitar Nation in mid-2007, after noticing that despite the growing popularity of ethnic instrument libraries, few products sampled non-Western instruments with a level of depth expected from a modern sample library. We spoke with numerous composers and producers who were unhappy with the current offering of ethnic instrument samples which only provided an “overview” of sounds and lacked the detail necessary to provide realistic solo performances.

The sitar, tampura, tabla and baya were chosen for our library not only because these instruments have remained a foundation of Indian classical music for centuries, but also because they have even permeated Western music since the 50s and 60s. Sitar Nation is the first library to capture these instruments with a level of detail and realism normally reserved for violins and pianos, allowing the composer to control and play these beautiful sounds without relying on excessive programming.

The library is built on 2.7gb of “unlocked” 24-bit/44.1khz audio content. Eighteen main patches cover a variety of important playing techniques for all four instruments, all of which can be loaded from up to three positions: close, room, and ambient. This, combined with extensive sampling for velocity and round robins, allows you to carefully reproduce authentic sounds OR simply add flourishes of flavor to your compositions with a minimum of time spent.

Also included with Sitar Nation is a set of seventeen FX patches which take the core audio content into new directions using both pre-rendered offline processing and effects/programming within Kontakt. The result is a wide variety of highly useful sounds, from drones and percussion to chimes, pads and keyboards.

Handcrafted, Gourdless Sitar
Performed by Thomas Flanagan, the sitar we recorded is a custom-made instrument crafted from wood that seasoned for seven years! Articulations include plucking (thumbed and picked), mordents (quick “turns”), strums of the chikari (rhythm) strings, whole tone bends, glissandos at different speeds and both major and minor tonalities, basic phrases and tremolos. Thorough velocity and round robin sampling was used for many articulations, with up to four layers and three round robin groups.

Tampura
Traditionally an instrument played by an apprentice sitar player to accompany an expert. Though the body is smaller than the sitar, the simple, open drones it produces have a unique timbre that provide an excellent rhythmic base. This instrument was also performed by Thomas Flanagan.

Tabla & Baya
A set of two custom-made, carefully tuned hand drums performed by Jeremy Dyen. The sheer number of strokes possible for the tabla or baya alone is staggering, but we chose to thoroughly record some of the most widely used and recognizable techniques such as both edge, open and muted strikes as well as multiple pitch bends in different directions and at different speeds. Every stroke was recorded with nine velocity layers and three round robins to allow for seamless, human performances.

Special FX
From the unprocessed audio content, we created a number of patches using both offline and Kontakt processing to open up a whole new dimension in sound. For example, “Livewire Drone” takes sitar drones and uses FM synthesis and waveshaping to “electrify” the timbre of the sitar. “Deep Chime” uses extensive granular synthesis to create an ominous, semi-harmonic orchestral chime hit with a reverberant ambiance. The two “Shaped Kit” patches use ring modulation and waveshaping to turn the tabla and baya into an electronic percussion set.

BIG THANKS TO TEAM 0TH3Rside