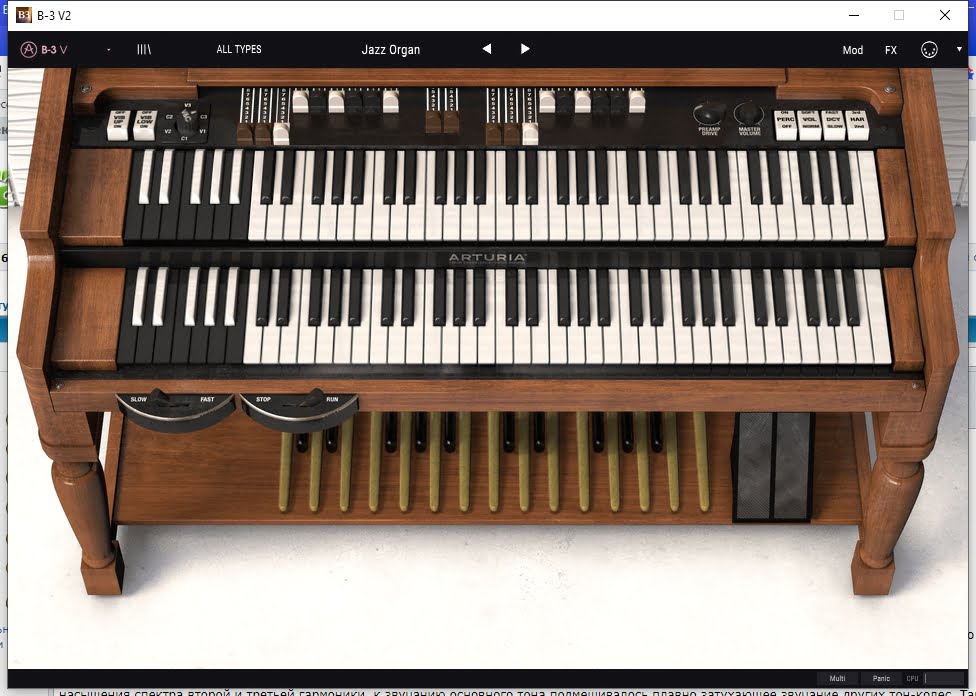 Description : The B-3 V organ is an emulation of the legendary Hammond electromechanical organ, created in 1935. As is well known in all Hammond organs, to create a vibrato effect, rotating horns were used on the built-in speakers. According to Arturia, they tried to simulate this effect exactly, which made it possible to recreate the unique authentic sound of the organ B-3.
In addition, in the software version of the instrument they tried to preserve the specific formation of the tone of the Hammond organs. Instead of saturation of the spectrum of the second and third harmonics, the fading sound of other tone-wheels was mixed into the sound of the main tone. Also in the virtual B-3 V recreated characteristic distinct attack, characteristic of only electromechanical organs.
With regard to the effect of emulation of Don Lassie systems, in the B-3 is available separately turning on the rotation of horns, adjusting the speed of rotation, change the acoustic design, the position of the microphone. In addition, there is a convolution reverb with 20 presets based on spring reverb with vintage amps of the time.
Of the current features, the software version of the organ has received three additional modes that allow automating changes in the positions of the drawbar handles. It provides automation for the envelope, LFO and step sequencer. In addition, some specific settings were added that allow you to adjust the attack and attenuation, saturation of the spectrum, click during the attack, and leakage currents.