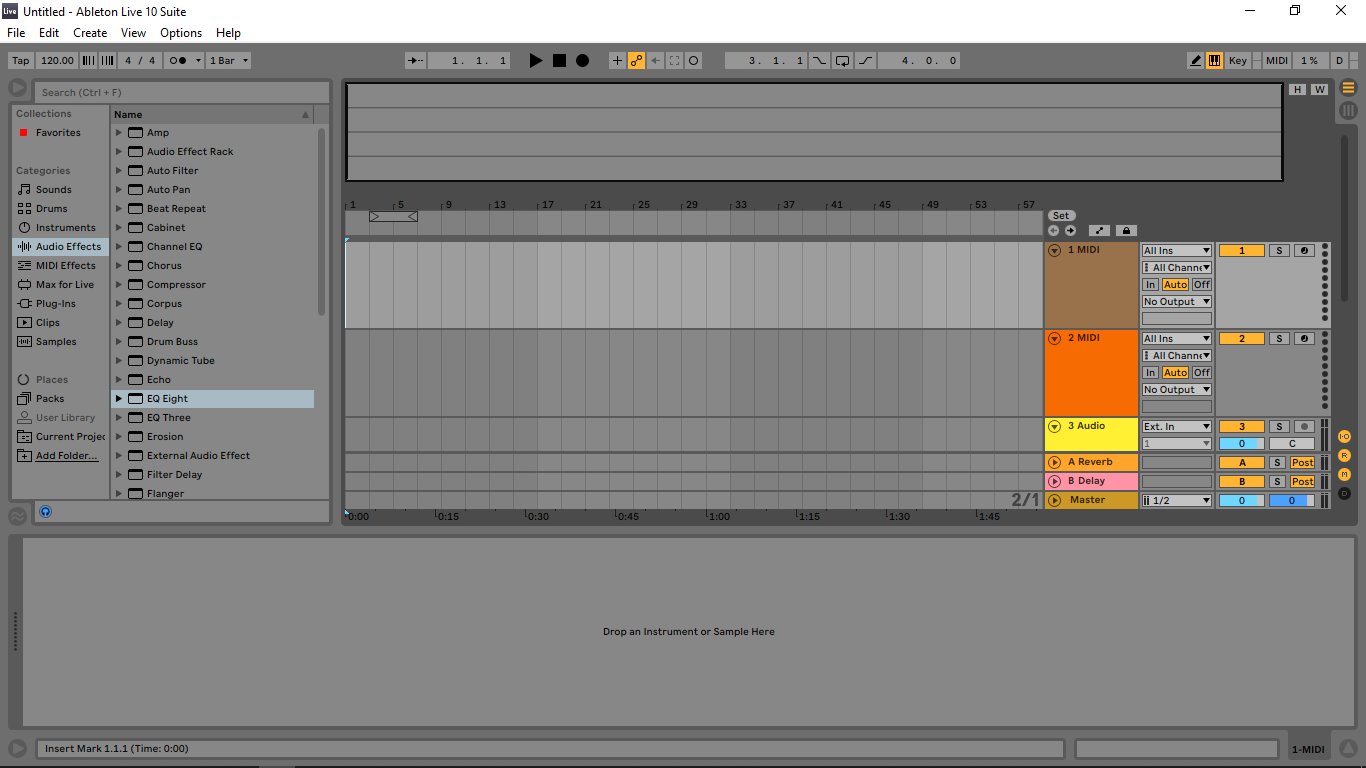 Ableton Live allows you to easily create, produce, and play music in one intuitive interface.
Live synchronizes everything and works in real time, so you can play and change your musical ideas without interrupting the creative process.
But Live also has a revolutionary Session View: a unique notebook for improvisation, playing and playing with musical ideas, without time limits. Start and stop any number of audio or MIDI loops freely and independently – everything remains synchronized. Almost everything in Live works in real time – add, reorder or delete devices, play with flexible routing of Live tracks and much more – all without interrupting the creative process. Create bolder sounds with new Live devices. Stay on stream with many workflow enhancements. Get farther away from your computer with Push. Create your own sound using a curatorial library. And get the unlimited potential of Max for Live, built in without problems.

New features and improvements OS Support
Live now supports macOS Catalina (10.15).
Important: before updating to macOS 10.15, please read this Knowledge Base article https://help.ableton.com/hc/en-us/articles/360009770040 .
On macOS, Live now uses AVFoundation instead of QTKit / QuickTime for MP3 decoding, video playback and video export. The MP3 experience should be unchanged. Video playback and exporting is now much faster. Some videos using old formats can no longer be played back. For a list of formats that are no longer supported, see https://support.apple.com/en-ca/HT209000 (Note: this article is about FinalCut, but applies to Live’s video support as well.) While running macOS Mojave (10.14) or earlier, such videos can be converted into a supported format by opening them in QuickTime Player (see https://support.apple.com/en-us/HT202884).
Please read this Knowledge Base article https://help.ableton.com/hc/en-us/articles/360009756960-MP3-decoding-video-playba…and-later-macOS- .
Automation
When dragging, stretching or skewing automation, or when changing the curve of a segment, pressing the ESC key now resets the automation to its original state.
The Toggle Automation / Modulation buttons now appear grayed out for unwarped clips.
The global “Snap Automation To Grid” option is now ignored when Draw Mode is enabled, so the quantization always matches the visible grid.
A “No more automation events could be removed” message now appears in the Status Bar when performing the “Simplify Automation” command on an envelope has no effect.
Interface Improvements
Live now supports Home, End, Page Up, and Page Down key interactions in chooser controls and context menus. Home and End keys move the selection to the first and last options respectively. Page Up and Page Down keys move the selection by the size of the page, or by 25 entries if the chooser control is collapsed.
The metronome’s Rhythm setting is now saved in the Live Set.
The “Freeze Track” command is now available in the context menu of automation lanes.
Live’s browser now starts searching after entering a single Chinese character.
Adding or removing scenes in a Live Set with many scenes is now significantly faster.
Added support for emoji characters in all text fields on the following systems:
Windows 10 1803 and later
macOS 10.11.6 and later
The Preferences dialog window is properly centered when Live’s zoom level is not at 100%.
Device Improvements
In the Multiband Dynamics device, the “Shift” modifier is now used to fine-tune the bands, and the “CMD” (Mac) / “CTRL” (Win) modifier is used to adjust all bands simultaneously.
Text in the Redux device is now correctly displayed.
Made some minor refinements to the Channel EQ device’s UI.
Control interfaces
Added support for the Akai Professional Force, MPC X, and MPC Live.
Every Push 2 user will get a firmware update to v.1.0.64 if their Push firmware is older. This firmware version implements a fast SysEx that allows setting any RGB LED to any 16 bit-color, independent from the 128-entry palette.
Vst3
Added support for the IInfoListener interface in VST3 plug-ins. Supported properties include Live’s track name, track index and track color. Certain plug-ins will now show Live’s track names in their Mixer section.
When running VST3 plug-ins in HiDPI mode, it is now possible to disable scaling their GUIs via a “Auto-Scale Plug-in Window” context menu entry. This entry appears in context menus of plug-in devices in the browser, and in the title bar of plug-in devices in the Device View.
Video
When selecting FLAC as the File Type in the Export Audio / Video dialog, video export is now disabled. AIFF or WAV must be selected to export video with sound. This is consistent with the MP3 export behavior.
Translations
Updated some info text translations in German, Spanish, French, Italian and Japanese.
Max for Live Improvements
Updated the bundled Max build to version 8.1.0.
Live will no longer load Max versions older than Max 8.1. When an external Max version older than 8.1 is selected, Live will fall back to the bundled version. Users cannot select Max versions older than 8.1 in the Preferences.

Copying, transferring program settings:
To save the settings, manually copy the Library.cfg file (where collection labels are stored), Preferences.cfg , Template.als and Options.txt (if used) from the Live 10 settings folder (for example, Live 10.0.1). ) to the Live 10 settings folder (for example, Live 10.0.2) or to another folder. For example, after reinstalling the system, you can return the files to their place.
Note. Live 10 must be run at least once to create the Settings folder .
The Preferences folder is here:
Windows
Users [username] AppData Roaming Ableton Live 10.xx Preferences
Mac
/ Users / [username] / Library / Preferences / Ableton / Live 10.xx /